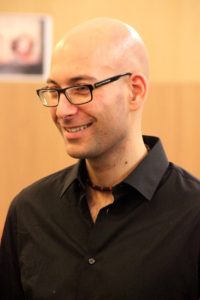 I live in Dublin with my amazing wife and two daughters. I’m a musician and IT professional.

I’ve been dealing with a medium-to-severe stutter for as long as I can remember.

Every attempt addressing my speaking problem in both conventional and non-conventional ways failed miserably. Things started to really change when I realized I have been seeking answers for the wrong questions.

Since 2015 I’ve been exploring my speech and self-expression, trying out and perfecting different ideas and practices. I’ve been interviewing anyone and everyone I can find who has overcome their stutter or who is expressing themselves in an inspiring way.

Today, I find myself very social, confident and having a lot more control of my speech. Here are some of my recent achievements:

I also stutter much less. But that’s not the point; it’s the side effect.

That is the point.

Why I started this blog

I was the boy whose biggest fear was having to read aloud in class. Having all eyes burn me, while I’m spurting syllables between long gaps of suffocation.

I was the boy who needed to ask his best friend to speak for him at the store, as previous solo attempts ended up in an embarrassing guessing game between my pointing finger and the shopkeeper.

I was the one always sitting alone at parties, trying to look cool and hoping no one turned to him and broke the facade.

I was the child who adopted invisibility as a way of life. I accepted shame and embarrassment as the default emotions associated with speaking.

For the first 20 years of my speaking life, I had accepted these situations as ‘normal’ and felt unworthy because I ‘had a stutter’. It took me another 10 years to undo this and find a different path.

When I was 22, after having one of the worst stuttering experiences of my life (see here for more), I realized I have to take back control. I began putting myself into difficult speaking situations, stretching the limits of my comfort zone and proving to myself that ‘I can’.

I gave toasts, lectured at college, worked in jobs involving presentations and phone customer support, led large bands of nine-eleven musicians, talked on stages and even on live radio.

Ten years later, I felt my life was no longer controlled by my stutter, but I still felt blocked from fully expressing myself. I felt that my stutter still controlled my external shell. I was finally ready to take on the stuttering monster once again, only to find I was fighting myself all along.

I believe there’s not enough help on stuttering that takes the core of the problem head-on. Speech-Language-Therapists are often not knowledgeable enough or not experienced with this niche problem. Even if they are, it’s rarely from first-hand experience and there’s a massive lack of understanding of the inner world of a person who stutters.

I hear about people getting bad advice ALL THE TIME, making their (or their children’s) speech WORSE.

I believe that you can only take someone to places you’ve been yourself.

Most people I know, who fully recovered from speech problems, have done it by themselves and got on with their lives without really sharing their knowledge and experience.

By sharing my path, I aim to push and empower you on your own journey to full self-expression.